Home / Personal / Away From Home

Just to let everyone know who email me why I haven’t been responding as quickly as I normally do, I’ve been in Jacksonville with my family taking care of my dad while my grandmother is in the hospital. My grandmother had major colon surgery to remove nearly 50% of her colon due to a section of it being bad. She is doing fine now, and recovering, but won’t be home for a week to 10 days.

My grandmother normally cares for my dad, who has throat cancer. The tumor has swelled up under his jawline so bad that they fear it may cut off his ability to breathe. He is in pain a lot, but hospice come by to make sure he is as comfortable as possible. The doctors say that he has only two months to live. I’m taking this time to care for him and spend time with him.

Yesterday I cleared his apartment, and it was not only physically draining, but emotionally draining, as well. His entire life was accumulated in that apartment; photos, clothes, memorabilia, rings, and his entire business he has worked out for nearly 20 years. He wanted me to take anything I could use, and then whatever is not taken, a local church would go in there and take the rest.

It was especially painful as he told me to throw away all his files and paperwork. So many years of work. A dream he once had, cut short and thrown away. It’s too painful for me to contemplate too much.

While resting on the bed, I smelled that familiar smell of my dad. Not a stench, just a personal smell, something that is created from luggage, using a particular type of cologne all the time, clothes you’ve had for so long, and so on. Every single one of us has our own smell, and everywhere my dad goes, no matter where, he has that particular smell in every house/apartment he lives in. I realized that’s the last time I’ll have that familiar feeling of my dad.

I think that’s when it all hit me, that I finally realized that my dad is dying and that I’ll have to live the rest of my life with just memories of him. Now I have to hold on to as many of them for as long as I can.

Here’s a rare picture of my dad and mom together, taken recently: 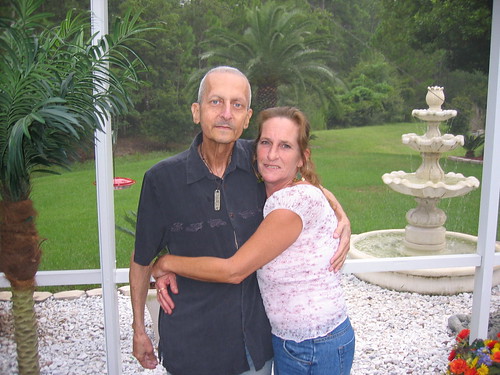 11 Responses to Away From Home