Recently I’ve taken to noticing and appreciating the sky, especially clouds. Not exactly sure why, really. Maybe it’s the preliminary sign of mid-midlife crisis? Yesterday while walking the dogs, it was sprinkling, the whole sky as far as the eye can see was filled with rainclouds. Except in one particular area, where there was an opening.

It was getting close to dusk, and the sky was bright orange, the clouds were dark orange filled with rain. But where the opening is, you can see a clear blue sky through it, even though everywhere else it was overcast and burnt orange. Through the opening, I could see the top of one of the rainclouds, illuminated in bright gold due to the sun shining on it. It was really neat, I wish I had a picture of it.

However, I did get a picture of today where the clouds were silver-white, tiny hints of rain in them, but not enough to dark them too much. The picture: 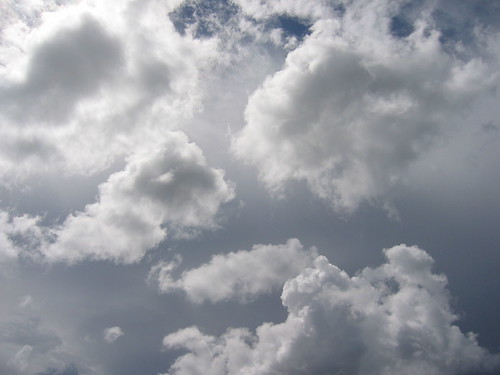