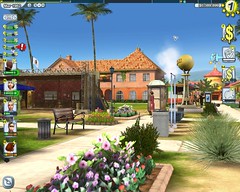 Lionhead Studios has put out a game that I’ve been enjoying a lot lately, called The Movies. It allows you to build a Hollywood studio from scratch, and even create movies yourself. Although it is limiting when you start out, it gets better.

Unfortunately there are a lot of quirks that kind of ruin the whole movie-making process. When I read previews about the game, I expected it to have more freedom, but it is pretty restrictive. After playing the game for a few hours, you start seeing the same movies being made over and over again, just with different settings, backdrops, and costumes.

With that said, I’ve created a movie that you can download here (1.87MB) (right-click on link and choose Save As) called The Rake of Heroes. The backstory is that a father discovers his eldest son was killed in combat and his grief was so great, he couldn’t bear it.