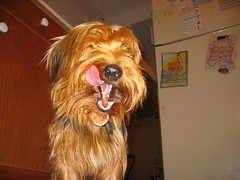 Kimberly just got back from going around trick or treating, hording a lot of candy, and she decided to dump all of it on her bed. While she was eating some reheated dinner, Buddy apparently decided to go in her room and see what all the goodies on her bed was.

When I go to get something in my room, he came trotting out of Kimberly’s room towards the living room. The way he trot told me he had something precious in his mouth, he looked very excited, so I followed him and snatched something out.

It was a Kit-Kat bar. The little rascal found a morsel he just had to have. Five minutes later, and we found a couple other candies, one lying on the couch, another tucked inside the loveseat half-in, half-out. It seems the Kit-Kat bar was what he was looking for, as he was about to chomp down on it if I didn’t snatch it away. I found it all very amusing, as did Buddy, but Kimberly wasn’t amused one bit.